It might come as a shock to entrepreneurs who’ve used attraction marketing to grow a large online business, but, the argument from traditional networking leaders against building online has been that they’ve never seen anyone build a BIG business using the internet.

They’ve said that the internet isn’t duplicatable and only results in distracting you from your business.

They’ve said that so-called ‘internet network marketers’ are sheisters who are not really making money from their opportunity but are making their money from selling you internet marketing training. (There’s some truth to this, but that’s a convo for a later time.)

Bottom line is that the BIGGEST names in network marketing are on record warning their downline and anyone else against the futility or even the dangers of trying to build online.

That’s been their stance since 2005, when ‘attraction marketing’ was unleashed challenging the industry status quo.

In fact, every chance they’ve gotten, these leaders have tried to discredit and at times, even slander leaders who advocated the use of ‘attraction marketing’ as an alternative to offline cold market recruiting tactics.

So since 2005, there’s been a stalemate between the ‘Old School’ vs ‘New School’ camps.

What’s interesting is that the ‘New School’ marketers, at some point just decided to disengage from the “debate”, ignore the ‘Old School’ networkers, and just do their own thing anyway.

I mean really, what’s the point of arguing?

If I choose to go online and am able to earn a 6-figure, 7-figure and even 8-figure income in the home business industry… what is there to debate… right?

So for the most part, that’s what we’ve done, unlocking streams of income through marketing their opportunity, Top Tier programs, affiliate marketing, info-products, and more.

More fundamentally, what thousands of us have chosen to do, rather than have our identities be derived by any one company… we’ve chosen to build personal brands which aspiring entrepreneurs want to be connected with.

And I must say, this concept of building a personal brand is not something that is unique to our industry.

Think of the Gary Vaynerchuks, Steve Jobs, or Mark Cubans of the world!

It’s a stone-cold fact that nothing is more valuable in the business world than a trusted brand. And nothing can create a better connection to your market than a trusted ‘personal brand’.

The truth is, that over the past few years, as company leaders have discouraged their downline from attempting to build their own value & brand as internet marketers, they’ve been doing the exact opposite of what they’ve advised. They have been secretly using the internet to build their business and expand their brand with powerful new formulas like attraction marketing.

This past November, I attended a massive generic network marketing event being organized by a friend and HUGE leader in our space. However, I wasn’t really interested in being at the BIG event.

I actually went to an event before the event, a much smaller and more private mastermind event, exclusive for 6-figure earners & above in the network marketing space.

You actually had to send in verifiable PROOF that you were making 6-figures in the industry through a copy of pay stubs, tax returns, or other financial records.

As the new Chief Marketing Officer and partner in Attraction Marketing, it’s my job (much like your upline leaders) to help our community members maximize their incomes for our members in their respective businesses and sustain and improve a training environment aligned with those goals: something I do with my attraction marketing formula. I felt it was necessary for me to see how the rest of the industry is developing.

I asked the host if it was ok, as a leader of an online marketing system (not network marketing per se), if I could come to learn as I saw great value in learning how organizations are managed and cultivated from the top, even if they were ‘offline’.

Over the course of 2 days, I met some extraordinary network marketing leaders! From the newest success story, barely making it past the $100,000 per year mark, to leaders earning up to $10 million per year.

During the day, there was training being delivered by my friend on high-level business concepts and frank & honest discussions, which everyone in that room agreed would not be shared with network marketing newbies or the public.

I can say, however, that there was almost no internet marketing taught or discussed, even at this high-level event. I was actually a little surprised.

For a little bit, they had me convinced that they were all ‘old school’ network marketers.

Cocktails + Vegas = The Truth On How Top Earners Actually Recruit! 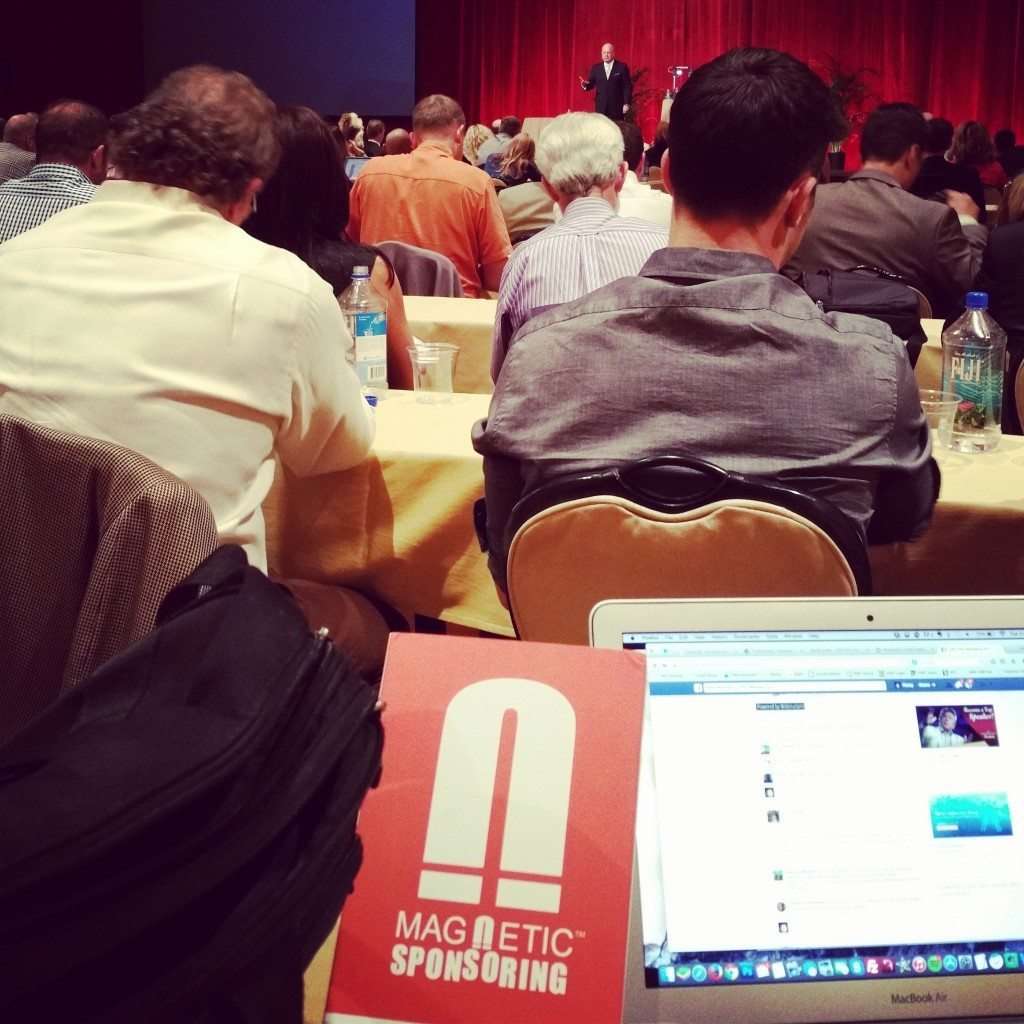 I was the ‘attraction marketing’ mole at this event.

But like most events, the most valuable and revealing conversations happened during the networking cocktail parties in the evenings. A few drinks and an evening in Vegas proved to be the ultimate truth serum for these individuals.

I have to estimate that I met at least 50 people during those first few days. Considering that there were only 300 people at the Summit, that’s a pretty good sample of the room.

To my surprise, half the people I spoke to, who were earning anywhere between $100,000 per year to $2 million dollars per year, admitted that they were, at least in part, building their businesses using the internet. Some, in fact, were using the attraction marketing formula!

I spoke to one gentleman who was earning $400,000 per month in his business, who revealed that he loves internet marketers and strategically recruits them into his organization, and they are the ones primarily responsible for the lead flow for his team’s recruiting efforts. He admitted that he himself was a computer dunce, but the lead flow provided by the internet marketers has been a godsend!

I spoke to another woman who already knew who I was and told me that in the past 2 years, she had built a multiple 6-figure income in her business, primarily using the internet. She was a student of one of our students in attraction marketing!

And a new friend, whom I’ve known about for quite some time and finally got to meet, shared with me on how he built a multiple 6-figure international business using ‘attraction marketing’ with one of the biggest and most well-known network marketing companies in the world. In fact, he admitted to me that ‘old school’ network marketing was way too hard and prefers building his brand online.

Plus, the 6-figure earners I spoke to who were NOT using the internet had a DEEP interest in knowing how to incorporate it into their efforts.

Why Top Earners Keep the ‘Attraction Marketing Formula’ a Secret!

To my surprise, no one I spoke to was negative about building online or using the attraction marketing formula at all. However, the ones who are having success online, readily admitted that they don’t publicize the fact that they build online for two reasons:

Fear of being discredited and put down by colleagues in the industry.

And concern that their primary company would find out what they do!

Truth is, I always knew that the biggest ‘internet network marketers’ who built massive businesses online actually weren’t the ones who were public about it.

Out of necessity, the biggest ‘internet networkers’ who’ve built $500,000 and up per year businesses, have had to keep it a secret! I can think of one of them right now, who actually built his business with one of the top 5 network marketing companies in the world.

My sense is that as our world and interactions become more digitized, direct sales companies and the ‘Old School’ camp won’t be able to hold out much longer and will have to admit that the internet can and WILL play a crucial role in their businesses.

My warning to leaders in the industry is simple…

The internet can either be your best friend or your worst enemy.

Choosing to pretend the internet isn’t there, will result in massive attrition because people will get curious and, against your advice, will end up on my list and learn about internet marketing from ME (or others like me)! :-)

Choosing to incorporate internet marketing into your strategy, will make you more valuable as a leader since there will be no need for them to learn about something, you are already leveraging in your business in a well thought out and strategic way, like the folks I mentioned above.

Why would they want to pay me to learn these skills, when they can participate in your internet strategy, specific to your business at no additional cost?

Ultimately, my message has never been one of ‘Old School vs New School’… because the fact is that both camps need each other!

The main reason I attended this private event with 6-figure earners was because there is SOOO much to learn about the nuances of leadership and community building that is essential to a thriving and growing networking organization (or in my case, a growing & thriving Attraction Marketing community), which cannot be duplicated with just internet marketing strategies.

And likewise, there is no recruiting tool more powerful and leveraged than internet marketing.

However, both methods need to be married in a strategic and very specific way, as I outline in the Attraction Marketing Formula course and FREE bootcamp.

There, I’ll show you exactly what to do and how to position yourself, so you’ll never have to chase, annoy, pester, or beg anybody,  ever, to take a look at your products, services, business, and your brand.

And as so many network marketing leaders, who are online, have all proven, there is no stabilizing force more powerful in business, than a trusted personal brand.

Once you’ve done that, your income will have transcended your company and that is when you will truly be an ‘independent business owner.’

So if you’re ready to get started…

Just click this link to get immediate access to my FREE 10-Day Online Recruiting Bootcamp and start generating leads this week!

Three Proven Ways to Grow Your Network Marketing Business, Using the Internet
The Single Most Important Copywriting Skill
How Leaders Look at the Holiday Season (Especially in 2020)
How To Become a Network Marketing Top Earner
Proven Shortcut to Create Compelling Ads, Emails, Videos, and More!
What to Do When Prospects Give You Excuses…
The #1 Network Marketing Skill (Which Your Upline Probably Can’t Teach You)
Nine Insights for Writing Effective Email & Sales Copy
How To Read Your Prospect’s Mind
The 4 Dangers of Cold Market Recruiting
50% Complete
50% Complete

(enter your email address below and click the
“Get Instant Access!” button to get your 10 day boot-camp)